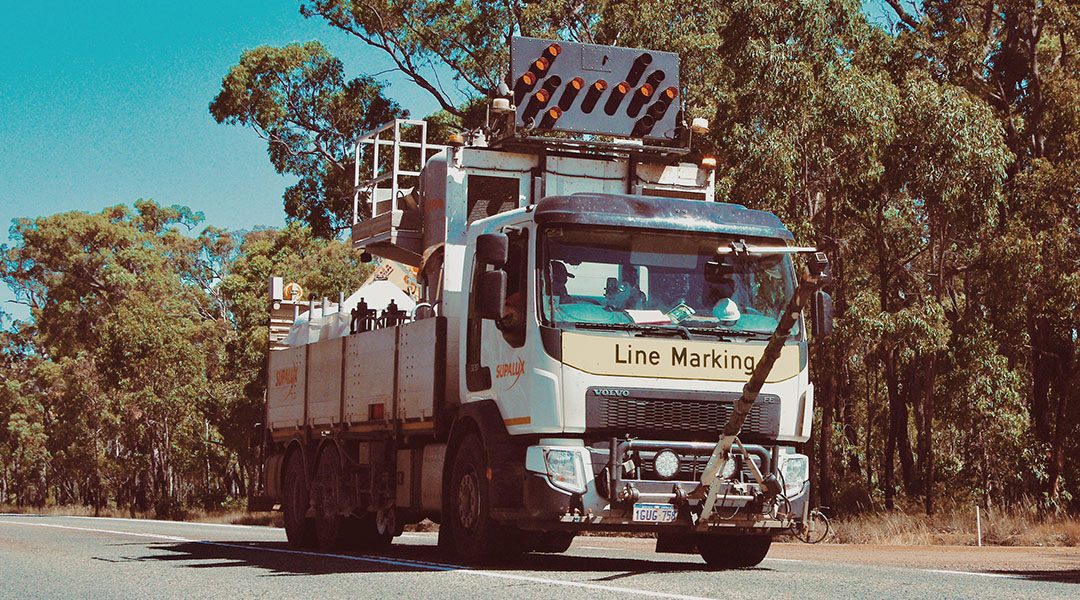 Since the middle of this year, SWARCO has its first own base in Australia, Namely on the outskirts of Western Australian metropolis Perth.
DriveON (DO) spoke with Jonathan vyse (JV), managing director of Supalux, to find out more about the new SWARCO family member.

DO: Jonathan, can you tell us in a nutshell what Supalux is?

JV: Supalux is a vertically integrated road marking group, specialising in the manufacture, supply and application of high-performance road marking systems in Australia.

We are in the unique position of being both the road marking manufacturer and the application contractor, the only integrated road marking group like this in Australia. It is the knowledge of material technology, how these various marking products perform and their capabilities, coupled with our application techniques, that is the secret of our success down under.

Our teams routinely paint over 30,000 kilometres of line markings each year. To put this into perspective, this is equivaent to painting a continuous line from Vienna to Vladivostok 3 times per year.

DO: Who started Supalux – and when?

JV: Supalux started in 1974 as a small paint factory that manufactured and sold decorative paint to house painters. My father, John Vyse, who has always been in the paint industry, bought the business as a going concern in 1989 when he realised that the factory had the essential elements that he could build upon, with a view to focusing on Industrial and Heavy Duty paint supply in Western Australia.

One could say he fell into the road marking business, quite by chance. He was contacted by the Roads Authority in Western Australia with a general enquiry for any paint manufacturer that could supply a one-off quantity (40,000 litres) of alkyd resin based traffic marking paint.

There was a national unavailability of the resin used by their Contract supplier and all road marking in Western Australia had stopped because of this. There was an urgent need, and with lateral thinking and ingenuity, Supalux submitted a sample within a few days and received the full order.

There was a lesson here that larger companies often only think in one direction. However, lateral thinking and remaining flexible and nimble can be very valuable. Indeed, a lesson we must always remember. Receiving this phone call was the start of our journey in the road marking business. Let’s just say, he appreciated the large volumes and favourable payment terms provided by these new government customers.

Road markings were always applied by the various State Governments in Australia. However, as the privatisation of applying road markings unfolded in Australia during the 1990’s, he saw an opportunity to diversify into becoming a contractor who could not only apply the markings, but manufacture them as well. It was a way of controlling the volume sales of our products and ensuring we were paid as well.

I joined the company 22 years ago to work alongside my father and have worked with him closely, learning the business and growing the company into a focused market leader, and well respected road marking specialist in Australia.

DO: What is your products and services portfolio?

JV: Supalux manufacture and supply a comprehensive range of Waterbased, Cold Plastic and Thermoplastic road marking products, along with high- performance premix and surface applied glass beads. We also have ISO accredited laboratory facilities to test all products supplied by our group. We supply these materials to the Australian road marking industry, along with using these materials in our contracting operations to deliver high-performance road marking systems to our government customers. These systems include longitudinal lines and transverse road markings, providing both dry and wet nighttime retroreflectivity for safer roadways in Australia.

DO: What are the peculiarities of marking roads on the Australian continent?

JV: The large distances in Australia are a real challenge. To give you an example, it is not uncommon for our crews to travel up to 6 days just to arrive at their worksite to begin work, and the longest highway we maintain is over 3,000 kilometres in length. These distances mean we must have very rugged and capable equipment in our road marking fleet, along with very dedicated employees. Once we mobilise our crews to regional areas of Australia, we may not see them again face-to- face for many months because the distances to return home are too great. This requires very strong relationships between our management and crews to maintain a cohesive team environment within the company.

DO: What are your objectives in cooperation with SWARCO for road safety in Australia?

JV: Improving the strength and capability of our organisation has been my major focus for many years. This focus has led us to work to improve all aspects including material technology, a more comprehensive suite of road marking materials, improvements to our plant and equipment, and most importantly a focus in upskilling our people.

I am confident that our customers will see our cooperation as very beneficial for road safety. Australian government road authorities are continually looking for world-class road marking innovations. With SWARCO, we can further work to exceed their expectations.

DO: Jonathan, what do you do when you are not marking roads, but have spare-time?

JV: Apart from living and breathing road markings, I do find some time to enjoy a few other important things in life.

I am a husband to a wonderful wife and a father to three young men, who are growing up very fast. One of which will be starting to drive very soon, so you could say road safety has become an even greater topic of discussion in our household recently.

I enjoy travelling overseas, however lately this has become difficult due to the pandemic. So we have spent some time travelling within Australia on long roadtrips with our family. We have a truly beautiful country with lots of special experiences to offer.

It also may not surprise you that as an Australian I also enjoy boating and swimming at some of our beautiful beaches.